My friend Ilya Lipkin originally suggested this feedback idea to me, which resulted in the first Screaming Lizard. Now he suggests a higher gain version; so here's the Dragon! Also includes my new 5-knob fuzz format and latching OSC switch.

Aimed at that circa 1970 fuzz tone made famous by Hendrix and Gilmour, in which at full guitar volume you get a hot, saturated, sustaining fuzz tone, and with the guitar volume turned down you get more of a gritty overdrive sound. Step on the OSC switch for extra insanity.

The Skreddy Pedals™ Dragon Fuzz is made from oldschool silicon transistors, which are doubled in parallel for noise reduction (giving 4 transistors total instead of 2)

The extra controls let you emulate different classic fuzz tones from the 60's and early 70's along with improvements for some of the issues those early fuzzes had (noise reduction, adjustable tone, and adjustable input impedance).

This can be a hot, grindy, saturated fuzz or an articulate fuzz, depending on how you set it up.  The bias control is set up to give you just the right classic response at noon, and you can play with it to go harder or softer. 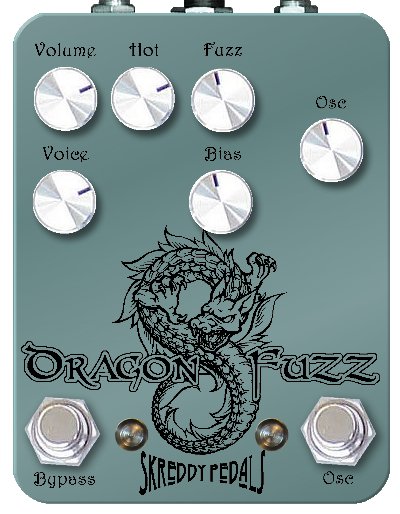 9v battery is not included. If you use a battery, then remember to un-plug the input cable from the pedal’s input jack when not in use to prevent draining (or you can also just plug in a power-supply, which disconnects the battery).

Made in the tall box format like the Echo, with top-side jacks

VOLUME
Gives you a LOT more output volume than most classic fuzzes, with unity gain around noon and plenty of boost beyond that.
BIAS
Lets you go from buzzy and low-fi to clear, louder, and more present. Sometimes referred to as a "MIDS" control since it does give you more (or less) of those too. Noon is the classic setting.
VOICE
Lets you go from bright and articulate to smooth and syrupy with that lovely upper-harmonic emphasis you hear in classic fuzz recordings. It's really nothing more than an extra guitar tone control. This fuzz sounds so sweet with the tone rolled down that you will love having this dedicated control right where it's at, freeing up the guitar knobs for all your other applications.
FUZZ
Sets the gain for this whole thing. Most fuzzes of this type sound best with the fuzz turned either all the way up or dialed back just a touch from max (in my opinion).  Gets milder and darker as you turn down.
HOT
Adds either a little or a lot of resistance to the input in order to keep a humbucker pickup from swamping the circuit and causing it to have a gated attack. But it's also useful for helping this fuzz work together with other effects (like to keep a wah pedal from making that siren sound you get from driving it into a vintage-style fuzz, or that extreme, trebly fuzz you get if you use a buffered pedal in front, for example).
OSC
Sets the amount of feedback you get when you use the corresponding footswitch, which is latching to let you do other things with your feet while enjoying this effect