The Skreddy Echo was designed to take over the duties of my old, green, tube tape echo.  My design goals were simple: 1) make it sound right; 2) it should inspire.  It is intended to emulate electro-mechanical units of the past and is not clean or pristine.

The repeats degrade very gradually into a musical, harmonic soup if you turn them up high enough.  Self oscillation is possible (though not in a touchy or unpredictable way) without the bothersome runaway volume some old analog delays have.

Thanks to Björn Juhl for helpful advice with regard to my limiter circuit.

Sample Settings -- a few of my favorites

Blank Settings Sheet to store your own favorites 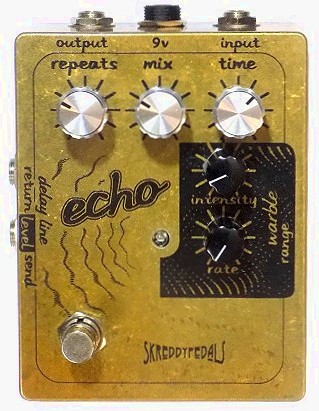 Allow about 3 months for us to get through our list and make your pedal.

Get Lost in Your Playing Again

Sounds equally great clean or with overdrive, distortion, or fuzz in front

True bypass, runs on DC adapter only (not included), in/out/dc jacks all on back side, loop jacks on left side.

POWER SUPPLY REQUIREMENTS: (note: a power supply is NOT INCLUDED)

Amperage: you will want to supply a minimum of 100 ma (Note: it will not actually draw 100 ma; this just provides a generous surplus which insures that no variations in supply voltage will be carried through the circuit from the LFO sweep--and this is not important at all unless you are trying to dial out every bit of pitch-shift modulation). Actual current draw is only about 26mA. Voltage can be 9v for the stock, soft, "vintage" tone, or higher, up to 18v, for a clearer, harder, more "bell-like" tone -- for example, the Dunlop™ 18vdc power supply. Do not use an AC power supply DC power only

"Your Skreddy Pedals Echo pedal is brilliant. Its design is your artistry, nothing less.

Demos cannot quite convey what your pedal does, though studying online demos led me to it. One has to play your Echo to hear and feel its specialness. It helps to be old enough to remember when there were only tape-based units for audio delay processing, which I am.

Currently, for digital emulators of tape delay I own the Empress Effects Vintage Modified Superdelay (VMSD) and the Strymon El Capistan, and as of today the Skreddy Pedals Echo. Each has its strengths and weaknesses, and I like each very much. The El Capistan I got specifically for long sound-on-sound delay, and the VMSD is a generalist that does clean digital delay, too. But of the three, the Skreddy Echo is the only one that made me smile when I played it for the first time. For analog delay I own a Diamond Pedals Memory Lane. It is most similar to the Skreddy Echo, I think, but that’s mostly its analog delay circuit being itself, with its old, wooly-sounding chips; it isn’t trying to emulate tape as such.

For me as a bass guitarist, distinctive about the Skreddy Echo is its correct narrow bandwidth response. Since I play with delays either rhythmically or arhythmically, the narrow bandwidth delay lets me easily have my playing ride atop the delay without them competing for frequency spectrum, especially when I ignore the delay’s tempo. My favorite example of this in my first outing with the Skreddy Echo was setting the delay to repeat almost on the edge of runaway, warble set to induce slight phasing, and delay mixed lower than my bass: glowing, complex, unfolding, collapsing sheets of sound. Simply beautiful.

Thank you for this excellent instrument, Marc."

"maybe the most tape like pedal I have ever owned and I have had most of them.

had a real EP-2 at one time and been searching for that effect ever since....

I spent more time with it after adjusting the loop trim pot to full clockwise....

I hesitate to say I have found ‘my sound’…..but with the setting I landed on it is pretty breathtaking.

I just stuck it on my board ... wow....huge sound and I get that really faint tape like feel where the repeats are subtle but ever present....

"Just wanted to express to you how much I enjoy your company and the pedals it produces.

I got my Echo in a few weeks ago and it is the best delay I've ever used and hands down one of my favorite pedals - I put a cheap pitch shifter in the FX loop, so the delay repeats create a cool oscillating sequence.

I managed to find a Pig Mine last year which I run with the Echo -I've tuned in the perfect Gilmour tone with these together, on my Marshall.

Thanks for making awesome products and pedals I want to play both because they sound amazing and because they are an ode to some great musicians!

Will buy more in the future."

"The Skreddy Echo got here on Friday. I plugged it in then, am basically just now getting up from my first session with it.

I have never, in my life, been so in musically sync with a musical device. I laughed in sheer, child-like musical joy for hours.

Fantastic work. I feel extremely grateful to own this."

"I just wanted to let you how totally awesome the Echo is. I played all weekend with it and it is just sounds soooooo good brother. Due to this musical harmonic soup you talk about with the repeat knob turned up I believe I have truly been inspired to play better and do some stuff I didn't know I could even do. My drummer buddy came over and we jammed better than ever with this musical harmonic soup washing our souls in the background.  Thank you for an awesome pedal and a pedal that will most definitely bring me inspiration. This thing is beyond what I can describe in words. Great job man and certainly worth the wait!"

"Hi Marc,Got the delay I ordered from you a few days ago.It,s a musical instrument all to it,s own.Thanks for making a delay that comes close to mimicing my EP 3, it is so much more then just a EP3 replicator.I very happy with it, it was well worth the wait."

"Everything sounds good going into it, honestly. I was playing some clean shit with just comp and Echo yesterday and I got lost for a good 45 minutes."

"For the saturated, dirty heads/old tape sound - I haven't played anything that has come close to the Skreddy, and can do it reliably."

"got it today! wow..... makes me smile! very familiar, and easy to use, and takes dirt wonderfully!!!! putting the EP3 on the shelf. really great pedal.... thanks Marc!"

It is simply the most inspirational and musical delay I have ever experienced.

I feel like I have an Ecohplex down at my feet. Only I don't have to purchase, clean and maintain the tape cartridges.
The way your Echo melds with my guitar tone. The way the repeats can go on for so long, and still remain in the background,
and not take over my signal, is something I've only heard with a real tape-echo unit.
The full control over the modulation, the included Loop (which I've only just begun to mess with), and the size of the box,
are all outstanding features, that I can't believe you were able to implement.

It is difficult to put into words the tingling a musician gets when they realize they have a truly special piece of gear in their hands.
I just wanted to let you know you reached that mark, and then some, with your Echo.

The only "bad news" is that I bought the Echo, and a Lunar Module from Cowtown Guitars.
I couldn't resist, even though I really like dealing with the builder directly, and you've been one of the best in the biz to deal with.

Brandon from Eastside Music Supply and Steven from Stringjoy

Demo of Skreddy Echo with a Tele in a studio

(699.23KB)
Reverend Slingshot on the center through a Vintage Twin Reverb and an Orange AD-30R

Slapback (in the mix with other instruments)(804 KB)

"That's Screw Driver on both parts, Echo, into the usual suspect Magic Brit. I think the L guitar is Tele bridge, the R guitar the PRS with TV Jones FilterTron bridge."

This one uses both the Skreddy echo - on a short doubling echo with warble - and the Boss digital on a long soupy setting.

MusicToyz.com takes us through a few different settings...

Demo begins by demonstrating how it sounds when you sync up the warble rate with the delay time--just a lovely wet, dimensional delay sound, with a subtle undulating current.

1:15 proceeds to increase the warble rate, which throws very obvious pitch bending effects into the mix, even though the intensity knob stays in the same spot.

7:40 turning down the warble, still very wet mix and lots of repeats

Fade out to fast dotted eighths.

Playing with the effects loop:

"I used the Bastin Sport, which is essentially a Travis Bean with SD Phatcats, into a Screwdriver and Echo for the first parts. The higher gain leads at the end are Lunar Module. All through the clean channel of an older Mesa Dual Rectifier."

(note: the ticking sound is the video camera's fault)