The Skreddy Pedals™ Lunar Module was designed for "that" certain silicon fuzz tone guitar solo I fell in love with on a best-selling 1973 album.

(okay, it's the "Time" solo)
I intentionally voiced this thing aggressive so it will cut through any mix.  Very satisfying and addictive "vintage" fuzz tone.

Unlike typical silicon fuzzes, which can sound thin and raspy, the Lunar Module has a fat sound and can be darkened to taste. 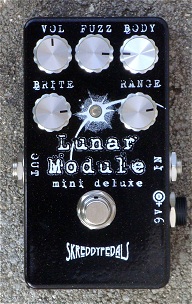 Allow about 3 months for us to get through our list and make your pedal.

Volume
Sets the output volume. You can adjust your Skreddy Pedal to roughly the same volume as your bypass signal (i.e.; “unity gain”) or you can boost your signal for a fatter tone.
Fuzz
Takes you from gritty, touch-sensitive overdrive all the way to liquid, infinite-sustaining fuzz. Warning: it can get noisy at high settings.
Body
Dials in the amount of bass going into the fuzz section, for everything from tight overdrive to full-voiced distortion to thick, nasty fuzz. Warning: it can get noisy at low settings.
Brite
You can get more brilliance and “hair” or make it darker and smoother, to suit your amp and taste.
Range
Sets the gain of the input transistor. Turned all the way up, the Lunar Module will be fuzzier and more aggressive, but also noisier. Turned lower, there will be a darker, tamer response. I tend to like it about 20% backed off from max.

9v battery is not included. If you use a battery, then remember to un-plug the input cable from the pedal’s input jack when not in use to prevent draining (or you can also just plug in a power-supply, which disconnects the battery). You may supply external power through an AC adapter. All Skreddy Pedals accept the industry-standard 9v DC plug (5.5mm barrel x 2.1mm center coax), negative tip. Please use a quality, regulated, filtered power supply.

"I received my LMMD yesterday. All of the clips on the Internet don't do it justice. You have to hear it with your own ears and feel it through your own fingers to experience the versatility of this pedal. My current rig is a Clapton Strat through a '64 AA864 Bassman. The only fuzz/overdrive/distortion pedal that has remained on my board through thick and thin is my xx, it even outlasted my xxx. The xx is very rich and dynamic, and nails Clapton/Cream era tones using the bridge pickup and mid-boost on the Clapton Strat. But I couldn't get those Strat neck pickup tones I had heard on record and in my head until now. The many shades of clean boost, overdriven, and fuzz tones out of this pedal are stellar. And if the versatility of the 5 controls on the pedal isn't enough, I love the way it reacts to the active electronics in my guitar. I never bonded with silicon fuzzes until now. I know I'm late to the party, but great stuff!!!"

Just wanted to send an email with massive kudos on the Lunar Module Mini Deluxe. I bought one on the emporium, and it is hands down the best fuzz I've ever heard or played through. I've played for about 12 years and have tried fuzz after fuzz and none ever lasted on my board for more than a week; they just never sounded musical to me. I plugged in the LMMD and was completely blown away. Huge props your way for making a great product, and it is quickly becoming my go-to pedal for just about everything. Take care, and keep up the great work!"

I received the Lunar Module today...man that was fast! Though I've only been playing with it for an hour or so now, and have yet to tap into all its full tonal capabilities, I am already in love with it! It sounds fantastic and really gets along great with my other pedals and rig. I love the Gilmour tones I get get out of it, not too mention that "ZZ Topesque" fuzz that always sounds soooo good. This pedal is VERY conducive to not only my style, but my rig and genre preference as well. All the "hype" surrounding the Lunar Module is completely validated...which is refreshing for a change. That isn't always the case in the world of guitar pedals. I'm really looking forward to incorporating this into my live rig!

Thanks again for everything...I truly look forward to doing continued business with you. Please keep up the GREAT work!"

"Dave and I were testing the Lunar Module together last night and he played shit in just about every style imaginable where dirt would fit and it all sounded great.  Non-floyd shit from White Stripes to latin tripped out salsa shit and some Sonic Youth scrambled noise for good measure.  After about 15 minutes of rocking the fuck out I asked him jokingly if he liked the sound and he was floored when I told him we had not swtiched dirt pedals for any of it.

It just so happens to be the silicon fuzz IMO.

If that's what your looking for you won't be disappointed. ;)"

"Tried the Lunar Module as soon as I got it out of the box. I love love love this pedal. I have five other fuzz boxes, but this one not only has it's own niche, I think it may actually be kind of the core of my collection now. I'm looking forward to playing it a lot more this weekend. Thanks. I think there's a couple of old pedals I can cull from the collection now.

I am impressed by how with this box, it is not a matter of "dialing in a good tone." Rather, every setting on this box sounds good, musical, and useful for something."

"I just wanted to let you know that I received the pedal today and have had a chance to try it out this evenening for a while. All I can say is .... "WOW"! I have no idea what sort of magic that you managed to squeeze into that little box, but that has to be the best damn fuzz/distortion I have ever used for the DSotM sound. You must have put a little extra on it, too because I managed to quickly dial in a few of the old Zep songs also.
You cannot find a happier, more satisfied customer!
Thanks,"

Just a quick update now that I'm a couple more weeks in with these pedals. Bottom line: I am simply thrilled with both of them.

I use them separately, stacked, whatever --- just sound great. The SD is my main dirty sound into my Fender style amp, but I use it as a tone shaper/slightly hairy boost into my Marshall style amp and it's wonderful.

And of course the LM sounds great into the Fargen (Marshall) and equally great when I run it into the Screw Driver when I'm using the SD as an always on dirt pedal into the Sewell (Fender BF).

"Marc,
Well, I got my Lunar Module from Cowtown in today ~8a.m. EST (I was waiting on the porch for FedEx) ...

Here was my approach to taking the "Pepsi Challenge"........
I avoided my pedalboard and just plugged my '71 Strat into the Lunar Module straight into my '63 Pre-CBS Fender Deluxe (with all four transformers upgraded to Mercury Magnetics)........
I messed with the trim pots and and played with it until now 12:00p.m. EST  ......that's four hours of getting lost in my playing  and I never even put it on my board!!!

I can really hear all sorts of tonal richness.....  I cranked the pre-gain trim pot and got my Hendrix tone.... AND it cleans up BEA-utifully...falling right in where I want my Gilmour tones.....

I'm really speechless; the LM is so AWESOME.....  LOTS of people use "effects" to get their tone and never focus on the main "pedal"......   a players hands, technique, & facility!

The thing that I LOVE about every pedal of yours, that I have come across, is that I have been able to find heavenly tones I have not heard before.... but more importantly... the integrity and response to my HANDS is freakin' UNBELIEVABLE.

I'm probably going to get rid of a few pedals because of this dandy.....  I love it!

You have made another tasty day for a player on Planet Earth..... and for the forseeable future as well!!!!

I'm really psyched about the Pig Mine......  when I get it I will have four of your pedals.... and the rest of my rig will probably go on Ebay.

A gig from last night, Catalinbread Ottava Magus in various sections, about 4:50 into the song I kicked on the Skreddy Lunar Module....nice!

love that band of gypsies album...