This is some dirty, sweet fuzz.  Heavy does not have to mean harsh or unnatural or even modern

Finally a tone control that is actually useful and powerful, yet does not sound bad at any setting

Makes a single-coil pickup sound more like a humbucker, yet doesn't completely obliterate the guitar's tone

Makes a clean amp sound like a vintage, cranked amp, even at low volume--preamp or power-tube distortion not required. 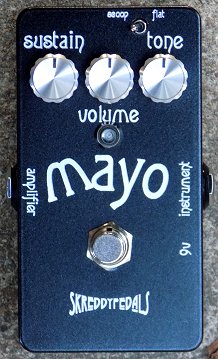 We recently got a number of new-old-stock vintage gold-lead Fairchild 2N5133 transistors, but they won't last long.

Choose either red or black.

A vintage, 4-transistor distortion, made with a tasteful blend of NOS and new parts, resulting in a creamy, grainy, circa 1971 fuzz tone (but with some extra kick).  Modern upgrades include SMALL SIZE, mid-boost switch, standard DC power, LED on/off indicator, and true bypass switching.

Your Mayo will not be silent when you are not playing. These vintage transistors all hiss—all of them. I have already eliminated the noisy ones, but even the quietest ones, the only ones I accept, are not dead silent. So do not use your Mayo into a high-gain amp unless you can live with noise when you are not playing (or turn off your Mayo immediately before and after you use it). Into a clean amp, the noise level should not be objectionable and of course massively quieter at idle than when you're actually playing something. But avoid any gain stages after your Mayo, including overdrives and clean boosts, as these will drastically increase the noise level

"this mayo, here, is some very seriously badassed stuff.
wow.
---
...the mayo sounds and feels incredible.  yes, it is of the style that is not sensitive to the gtr's volume control, but..... even so.....damn, it's good.
---
after another week-or-so of "testing", it seems very much like this could be the most broadly musical fuzz i've ever used, here.....i'm finding it incredibly satisfying.
i *will* make a clip or two, when i've got the time.
---
the mayo was KILLING, as i expected it to be, on the gig:
i brought the "wrong" amp, but it helped the "wrong" one be right-er,
no doubt.
so musical, it is!
yes:"
More from Guitar Player interview

"You are now making me redouble my efforts to get an original Mayonaise because the Mayo sounds similar to my Zero but with an extra dash of "WOW". I will then be that jerk with 3 Skreddy pedals on my board.

In all honesty the Mayo is what I wanted in spades. You seem to have a touch for muffs. Keep it up and I'll keep borrowing money to buy your pedals."

"I love my mayo. its great. its just what i wanted actually. I just recently received a 78' IC big muff so I already got some classic muff down. I find the tone control of the mayo very smooth with usable tones through out the entire sweep. its never to harsh. I personally don't think the mayo is noisy, compared to any other high gain pedal. i love the pedal and I wouldn't change it for the world. thanks a lot for building."

"Marc,
I just wanted to get back to you on that Mayo, I've given it a few days, a few amps, and a few guitars and really love it. It goes especially well with a Strat... gritty and rough around the edges, sings great with a Les Paul too but that's another story. I'm surprised also how much I like it with the gain set really low or with the volume rolled down a little on the guitar, it's not like the later big muff types I've tried in the past. All in all a great pedal at a great price and the noise level is no worse than can be expected so great job on that front too.  Hope you can keep making these..."

I've had the Mayo for about a week now. And WOW the Mayo is sonic heroin. It is very similar to my Zero but a little less aggressive, and a little thicker and creamier. Thanks a lot.

I just received the Skreddy Mayo. And I must say that this pedal is killer! This is the sound I have been looking for 10+ years now! This is a great Smashing Pumpkins-in-a-box ;)

Thank you so much,"

David from Beehive here. I just wanted to drop you a line and convey how well our recent tour went with the Mayo on board. While almost every other pedal in my rig needed adjustments, tightening, or just plain repair, the mayo came back with a dusty face. Period. Your build quality is killer, really, and at every show I had one guy or more asking about it.

Also, just for your knowledge and fun, the lady who produces my guitar sounds prefers the Mayo over the Rams head in most recording situations because of the slightly more pronounced mid and high frequencies. She can also hear that the Mayo has a smoother distortion, and female ears are inherently better at discerning high frequence info (no joke).

As I've said before the Ram's Head has a touch more lower mid-range punch, but you'll be hearing the Mayo and not the R.H. on Beehive recordings this year, for sure!

Thanks again, and I hope buisiness is going well.
Cheers"

"Hey,
i wanted to spend a little time with the Mayo before writing you... i feel really good about saying now though, Thanks! this pedal is exactly what i was hoping it would be. the first time i turned it on (with all the knobs exactly where you had left them) all i could do was laugh - i was just that happy. i've been trying to find this sound for years, and here it is, right in one pedal. instantly it made my big muff sound like a toy. i can't believe i've been using that thing for so long! and the flat mids option is great - when i use fuzz i'm longer getting lost in the dense mix of keyboards that my band uses.

i'm looking forward to doing some recording with it in the coming weeks, and i'll send you some if you'd like.
Thanks again and great work!"

"I got the Mayo last week and promptly sold my (other pedal manufacturer's fuzz/octave). What an awesome sounding fat nasty sweet musical fuzz.
Thanks"

After the email I sent to you monday arvo - I came home to find my Mayo. And mate - I GODDAM love it. For so long have I searched for the right fuzz for me and your mayo is it my man - the sustain and overall character is out of this world! Thank you very much. I will have a run with it in the studio this saturday so I cannot wait for that."

To tell you that I just like it would be an understatement!I absolutely love it!

It's seldom nowadays that gear can be so inspiring but this was the case with the Mayo.

I found myself lost in its dreamy,smooth sustain excursions for hours before I could even think about putting the guitar down.In that time,I completely restructured two of my solos for a song of mine and also must have come up with a dozen of ideas for more...

And I was definitely not in a "creating" mood...

"I received the Mayo this afternoon. I honestly don't know how you do it.  This is absolutely the best fuzz I have ever heard. I just played for about  an hour straight, running the Screw Driver into the Mayo at the beginning of my effects chain. Holy shit...now my only problem is trying to decide which one I like better, and I'm not sure I can pick!!!
...
I think I'm good on everything distortion. The SD and Mayo have covered ALL my bases for now. I'll keep an eye on your site, and definitely order anything else that fits my needs. I am very happy with your two pedals and your customer support.